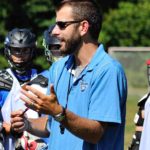 Ben Louchheim
Career Highlights:
• Head Coach, Saint James School, MD, (2009 & 2010)
• 2009 Washington County, MD, Coach of the Year
• Instituted a new offense for Hingham Youth Lacrosse, leading them to become the top youth program in Massachusetts
• 2 tournament championships in 2014 as the Hawks Lacrosse 9th-11th grade coach
• 9 years experience coaching lacrosse
Ben Louchheim started his lacrosse career as a defensive standout in Pennsylvania, where he was 1st Team All-State his junior and senior years. He went on to play at Dickinson College, where his junior year team posted the best record in Dickinson lacrosse history.
In 2006, Louchheim took over as the defensive coordinator of Carlisle High School in PA, and was immediately successful. That year, Carlisle won their league championships with the defense allowing a paltry four goals per game on average. The following season, Louchheim took a position as defensive coordinator of the Saint James School in the lacrosse hotbed of Maryland. Two years later he was named head coach and held the title for two seasons. In 2009, Louchheim was named the Washington County Coach of the Year and in 2010, coached Saint James to the most regular season wins in eight years.
Louchheim settled on the South Shore in 2011, teaching history for Hingham High School and coaching for Laxachusetts. In 2012, began coaching Hingham Youth Lacrosse, instituting a new base offense for the entire youth program. Since then, Hingham has become the top youth program in the state. In 2014, the 6th and 7th grade teams finished league champions, with the 8th grade team finishing as league runner-up. As the Hawks Lacrosse 9th-11th grade coach, Louchheim won two tournament championships in 2014.
Louchheim’s coaching style sets high expectations and demands that the players meet it collectively and individually on a daily basis, pushing and challenging each player. He provides positive reinforcement when deserved to keep them motivated, setting a highly competitive atmosphere at practice.  Louchheim’s priorities are showing the team what they can achieve when they push themselves beyond their comfort zone, and put their team goals before individual goals.