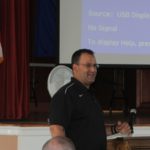 Rusty Miller
Hawks Coach Rusty Miller has been playing lacrosse on the South Shore since the mid-1970’s, where he was the goalie for Hingham High School from 1979-1981. He then went on to play at St. Michael’s College in Vermont, and was named Most Valuable Player his junior season.

In 2006, Miller returned to the sport as a coach for Braintree Youth Lacrosse. He became Director of the program in 2008, serving for four years, and currently serves as the Assistant Director. During his time as Director, Miller started the Indoor and Select U15 Programs in 2009, and remains the coach of the Select U15 team. Miller is currently the Assistant Coach at Braintree High School.

“I have had the opportunity to play and coach many different sports over the years. I take a very enthusiastic approach to coaching,” says Miller. “I show up energetic and ready to go and expect the same from the players. My single priority is to give the players the ability to succeed in the game. Of all the sports I have played and coached, lacrosse by far is the one I appreciate and enjoy the most.  I want to pass this enjoyment and appreciation of the sport to those I coach.”